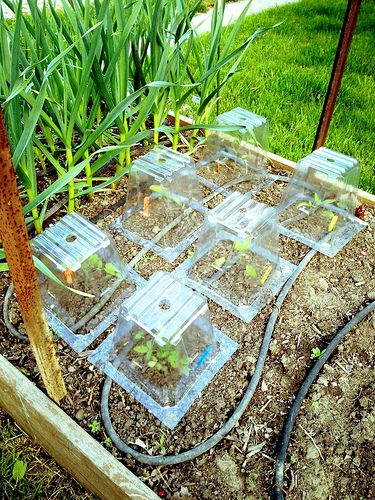 My spring continues to be a hectic one, which makes meeting essential gardening milestones a bit of a squeeze. But this week I managed to hit some targets by cramming in a few intensive sessions between other commitments.

We’ve been very lucky to have a week of lovely weather, bookended by weekends of the same. And while we’ve been out of town both weekends and I’ve been out most evenings, I managed to plant my tomatoes during a couple hours last Sunday afternoon after we returned home from the farm, and before we went out to see Edward Sharpe and the Magnetic Zeros. The band was really great by the way, although Koolhaus was a super-heated greenhouse with no a/c, and the sound quality was crap unless you stuck to the edges of the venue — a shame since the band is largely an acoustic one.

I stuck the tomatoes under cloches because I was a little worried about their small size and the coolish nights we’ve been having. They’ve now been under them a week, and look like they’re all making tracks rooting in, so I might remove the cloches this week, depending on what the weather looks like.

Next on my gardening to-do-by-May-two-four list was to get my peppers planted, and to get the beans, cucumbers, zucchinis, arugula and asparagus peas planted. This included installing a trellis for the zucchinis, which are a climbing variety. As of last weekend I hadn’t even started hardening off the peppers yet, so they spent the week on the porch (my attitude lately has been, “If you’re going to live, you’ll live, if not, I’ll replace you with nursery plants”). I just don’t have time to baby the things. And for some reason they just didn’t grow after reaching a certain height under the grow lights. I probably should have transplanted them into a mid-stage pot, like the tomatoes, but alas, I couldn’t be bothered.

I took Friday off to make the holiday weekend a nice four-day-long break, which I desperately needed, but I also needed to work on my workshops while I had an internet connection before we left town ahead of cottage traffic snarls. So I got up early and took advantage of the cooler weather and just got it all done. Everything that needed to be planted is in the ground, watered, and good to go. I even got the elephant ear plants that have been awakening under the grow lights in. This year I decided to put those in the ground, as we’ll be away for a chunk of time this summer and they are very water intense plants (I found last year I could hardly keep them hydrated in their pots, even watering them daily). They are definitely a luscious, exotic splash of greenery in the garden, but they most certainly are not water efficient plants. Hopefully in the ground they will require a lot less day-to-day care.

So now I can focus on using the rest of my spare time getting my workshops organized, which are coming along nicely.