If you’re just joining me here at DiggintheDirt, I’m slowly working my way through over 1600 photos taken this past July during our few weeks in Norway. You can read about Tromsø, north of the Arctic Circle, over here in Part 1, and our stay in Bergen, over here, at Part 2. This week I’m posting about the leg of our trip that took us on the Norway in a Nutshell tour.

We left Bergen by train, quite early, and on a very misty wet morning. We did well on our trip in that we really only had a couple wet days. Considering that the forecast called for virtually all types of weather (sun, rain, clouds… sun, rain, clouds) every day we were there, no matter what city, we enjoyed pretty fantastic weather most of the time.

The train from Bergen to Voss was a scenic ride, when you could see anything, as a great deal of that stretch is through mountain tunnels. Once we got to Voss — a very lovely looking city — we transferred to waiting buses that drove us to Gudvangen. Along the way we passed numerous gorgeous waterfalls and mountain scenery. Things got a little hairy on the crazy hairpin turns down a mountain road into the Gudvangen valley. There were several buses in a row, and each one had to pause perched on a very steep angle while the one ahead of us negotiated the tight turns. These were obviously some talented drivers.

We noted however that our driver never once offered any kind of announcement of where we were or what we were seeing. It seemed a little odd, and there was one of those pixel boards that said the town names and in a few of those small towns we stopped to let riders off or on, so we assumed that not only was this bus part of the Norway in a Nutshell tour, but it probably also served as public transit as well. Once we arrived in Gudvangen however, we found that there was no one present to direct us to which ferry boat (there were a few, and some were filling up fast). There was no signage, no direction, no nothing. We lined up for another boat and the ticket master accepted our tickets, which was the only real indication we were doing the right thing. Once on the boat, it was packed — overcrowded and not enough seats.

By this point I was getting pretty pissed off. I knew that the tour was a “touristy” thing to do — something Chris and I normally totally steer clear of — but it also seemed like a good way for us to get from Bergen to Oslo. The trip had been recommended to us by our friends in Norway even. But let me warn anyone considering taking it: it is essentially a fancy way to package up a series of commuter tickets, and very little of the trip involves any kind of explanation or narration (there are a couple exceptions). Not to mention the hoards of… ahem… mostly Japanese tourists. That’s all I will say on that matter. 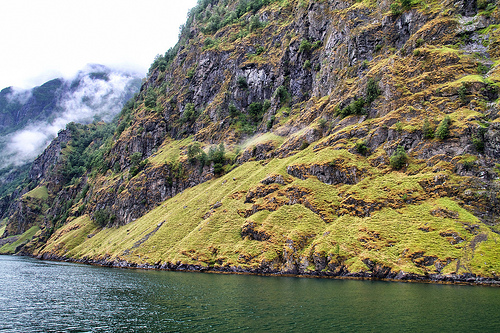 All the same, we made the best of it and ended up sidling up in some seats with two other couples, one from Calgary and the other from Australia. We would switch out so that one of us could go outside to see the scenery and the other would stay back and watch our luggage (and save our seats, which would be immediately scooped if you weren’t on the ball).

This fjord tour, which takes you through the Aurlandsfjorden arm of the Sognefjord, the longest fjord in Norway and the second longest fjord in the world. The Sognefjord is also incredibly deep, especially inland, with it’s maximum depth reaching 1,308 metres (4,291 ft) below sea level. The scenery here was spectacular — exactly the stuff of Norwegian Tourism campaigns — with steep cliffs that plunged straight down into the water. Misty clouds hung low amidst the mountains and cliffs. There were farms perched high on the cliffs with goats and sheep grazing on impossibly thin ledges. Despite the “touristy” nature of the Nutshell tour, I was glad we got to see this part of Norway. If we hadn’t, I think we would have felt like we’d missed a very significant part of the landscape.

You can do the Nutshell tour from Bergen to Oslo in one day, but we opted to break it up into two parts, and spent the night at the historic and quite beautiful Fretheim Hotel in Flåm. I’m not ashamed to admit we were influenced to stay in Flåm by the videos by Ian Wright (Lonely Planet, Pilot Guides, Globe Trekker) found on the Visit Flåm website (that guy has the best job I tell you).

However, another major influence was that this teeny little village has a craft brew pub. We had no idea how fantastic the Ægir Brewery was going to be. The pub itself is modelled after the wooden stave churches that Norway is famous for, with dragon head carving details at the roof peaks. Inside, the two levels of seating encircle a stone fireplace, and many of the rough-hewn wood seats and benches have reindeer and sheep skins over them, giving the place the air of a viking age castle.

Their beer was incredible — probably the best craft beer we tried in the country, and some of them rivalling anything we’ve had locally here. We picked up a six-pack from the brewery to bring home, but sadly, they weren’t as wonderful out of the bottle as they were in the pub. Norway has rules for selling beer that limit the alcohol percentage to 4.7%, and because of this we believe the bottled version is watered down to ensure it stays within the limit.

Again, the scenery here is spectacular, as you wind through the Flåm valley alongside the rushing rivers and roaring waterfalls. The trip up the mountain culminates at the Kjosfossen waterfall, where passengers are able to get out and experience it. I didn’t quite catch the entire story with all the excitement, but the guide mentioned something about legends of siren-like mythical creatures that would tempt people into the mountains, and at the waterfall suddenly this singing began, and figures appeared within some nearby ruins. Not only was the performance eerie and unusual, it was no doubt somewhat dangerous for the performers, who were all dressed the same in long reddish gowns and were likely drenched from the mist of the falls. Only one would appear at a time but they would come and go as if one entity was appearing and reappearing around the site.

Unfortunately our photos of the falls are pretty blown out. Chris and I have a differing of opinions when it comes to camera settings, and he doesn’t check the images on the viewfinder as he shoots. Most of his photos were overexposed and he didn’t realize it until the last few seconds he had at the site.

From Myrdal we switched to an Oslo-bound train, and the rest of the trip was an interesting ride through the highest parts of Norway. We didn’t make any stops along the way but one of the places of note along the route was the town of Finse, renowned for its trekking opportunities (cycling, skiing) and nearby glaciers, as well as being the site of the filming of the ice planet Hoth in The Empire Strikes Back.

While there were definitely aspects to the Norway in a Nutshell that I really didn’t like, most notably the “touristy” nature of it, I’m glad we did it — it was an easy and affordable way to see some of the most spectacular scenery of our trip: the most majestic fjords, the high mountain plateaus with their icy clear lakes and rustic cabins, and even the hilly, forested parts of eastern Norway as we approached Oslo.

Next up is our stay in Oslo. Check out the complete slideshow of my Norway in a Nutshell photos on Flickr.