After Christmas 2010, my mom told me about a potential sewing/craft project she thought I might like to take up for my niece and nephew, as a future Christmas gift. I endeavour whenever possible to make Christmas presents — I loath the commercialism of the holidays — and I truly believe people appreciate something more when you’ve taken the time to make it for them. Some home made gifts don’t always work out, but I’ve always found it’s about the thought and consideration you put into it that counts most to the recipient. (As an aside, I did however have a prominent local media personality, who shall remain unnamed, once tell me that “no one likes getting preserves!” during a discussion about our Christmas preparations. I was pretty offended by the comment; I had just told her that I’d made a big batch of my famous peach salsa that I was going to gift for the holidays. Clearly, this woman was in the dark about artisanal home-canned products!) 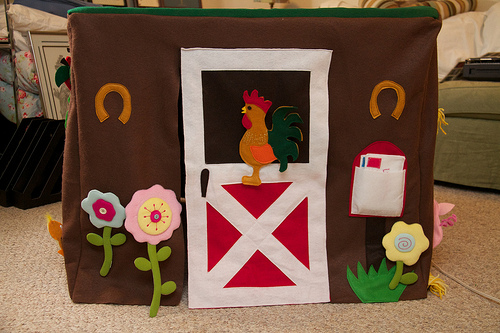 Anyway, back to the story at hand… I will openly admit that we ‘borrowed’ the concept for this project, a card table play house. There is an Etsy seller named MissPrettyPretty based in Wisconsin who sells both patterns and completed playhouses. I’m a pretty crafty person (have you noticed?) so I didn’t really feel I needed a pattern to make it on my own, and doing it on my own allowed me to customize the design. But some folks might enjoy using MissPrettyPretty’s patterns, or buying one of her pre-made houses so I’m happy to give her the airtime! There are others out there too who offer tutorials and ideas for the same concept. 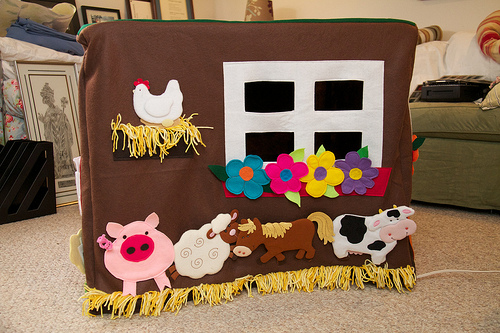 My mom and I started sourcing the felt for the project about a year ago — she found some at the local fabric store and I found some unexpectedly at a button store in Boston during the holidays while we were there, so between us we had a ton of felt on hand. It can take some sleuthing to find but its around. Fabricland has some but sometimes the colours are limited. You could also use other types of fabric but the felt has a real kid-friendly feel and solid structure to it, which works well for this.

I also found, quite by accident, some kids’ fabric decals, for decorating rooms, at a local Kitchen Stuff Plus outlet — flowers and animals, which I used to save time creating all the animals and decorative bits from scratch. They just needed a bit of hot glue and Velcro and voila — they’re part of the farm! 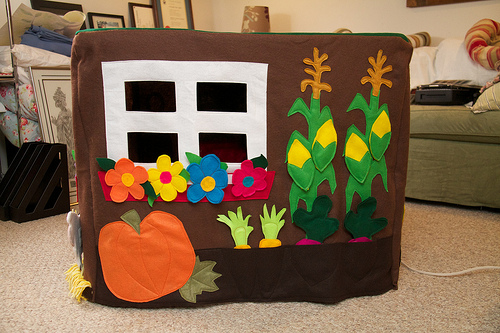 I kind of combined the idea of a farm/barn/house — I wanted the design to appeal to both kids, who are aged 16m and 3 years, and both genders. The flowers, corn cobs, carrots, beets, pears and apples are detachable with Velcro, as are the animals, and there’s a mailbox on the front that can have mail added (with envelopes addressed to the kids!). 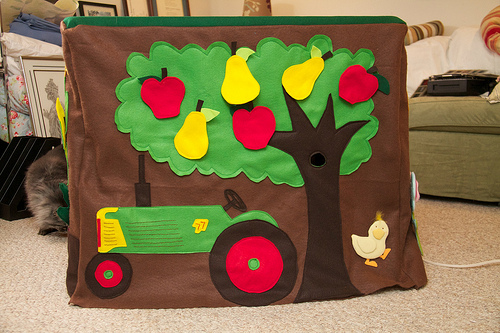 My original plan was to put a truck on the side with the tree, which would have been fine, but as I was working on it I started thinking about my dad and his collection of antique Oliver tractors, and how cute it would be to do the tractor instead. That was a fun little surprise to reveal when we brought it out at Christmas! 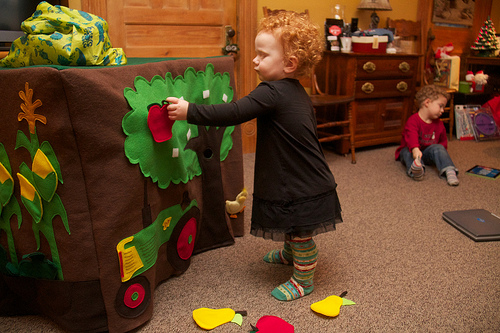 Overall it seemed like a real hit, and the kids had both me and Uncle Chris trying to squeeze inside with them! As a toy for limited space, it’s really great because the card table can fold away (and also be useful when you need an extra table). 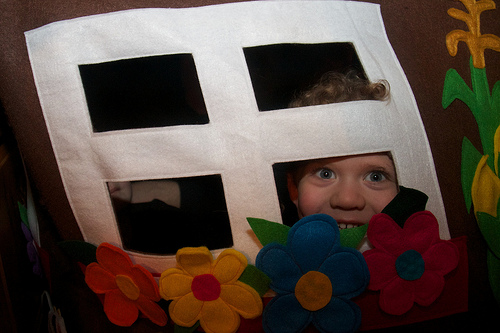 I’m very pleased with how it turned out, and it was a lot of fun to make. Almost everything is sewn, with a few exceptions, where I used hot glue in places that were too awkward to sew. The ‘straw’ is actually yarn that I sewed onto the felt. The door is attached along the top and can flip up out of the way if needed, and every side has an opening where you can see in, with the exception of the tractor/tree side, which just has a little peep hole in the tree. While the playhouse itself doesn’t easily fold up, the felt is pretty forgiving of wrinkles (another advantage to using felt over fabric) and I just had it stored loosely collapsed in a clear garbage bag for transportation (and to keep my cat off it, who was having loads of fun dashing in and out of it, and sitting on top of the table, while it was set up).