In the last week I’ve managed to seriously catch up on my long neglected garden. One of my major projects was to expand my front flower bed, along the front of the amour stone, to give me a bit more space for perennials (that I’m perpetually over crowding) and to add some more bulbs. In particular, I wanted to plant a bunch of Canada 150 tulips, which I heard about back in the summer.

These tulips were sold only at Home Hardware, and as a result, have been somewhat hard to get your hands on. I asked my Mom and my mother-in-law to keep their eyes out, since Home Hardware stores are a mainstay in small towns, but not so common in Toronto. My Mom was able to get a couple boxes, one for herself to split with my brother and one for me. But I also came across some “Happy Generation” tulips elsewhere, at a different store, and I picked up a few of those.

To me, these tulips look pretty much like the exact same variety. Of course the press materials re: the Home Hardware / National Capital Commission announcement about the official tulip say nothing at all about the variety’s actual name. So I’m sort of wondering if this is just a matter of branding over botany. So far I haven’t been able to confirm one way or another.

So I planted the tulips on separate sides of the my flower bed expansion. We shall see how much they differ (or not), come next spring.

My flower bed expansion took my beds from being only partially across the front of the stone to almost all the way across, and added some undulation instead of a straight across line. On the west side of the bed, I took it all the way over to the foot path, and on the east side, I rounded it off. Part of the motivation here was to not have to deal with all the crevices around the rock while cutting lawn, which is a giant pain in the butt (and we’ve had nothing but defunct weed whackers since we moved in here). But I didn’t want to follow the rocks all the way along the driveway as it reduces the amount of space we have for walking around open car doors, etc. No one wants to accidentally be walking in flower beds.

We also have a lot of dead lawn, after this summer’s drought conditions wreaking havoc on our poorly rooted sod. About half the lawn, on the top and bottom levels, died off. Up top, this was due to our landscaper putting down too much patio stone bedding material, and not pulling it back sufficiently and replacing it with topsoil to give the lawn something decent to root to. On the lower level, the east side of the front lawn is ridiculously compacted soil. Digging out my flower bed was like chipping away at slate, and actually created so much (de-compacted) soil we moved some of it to the backyard to fix some divots and erosion back there.

We’re reseeding with EcoLawn, which should be far more drought resilient than the sod was. But hopefully the long roots of the new fescue can penetrate that compacted front lawn. Because if it can’t, I think we might be faced with having to dig it up with some far more serious equipment. 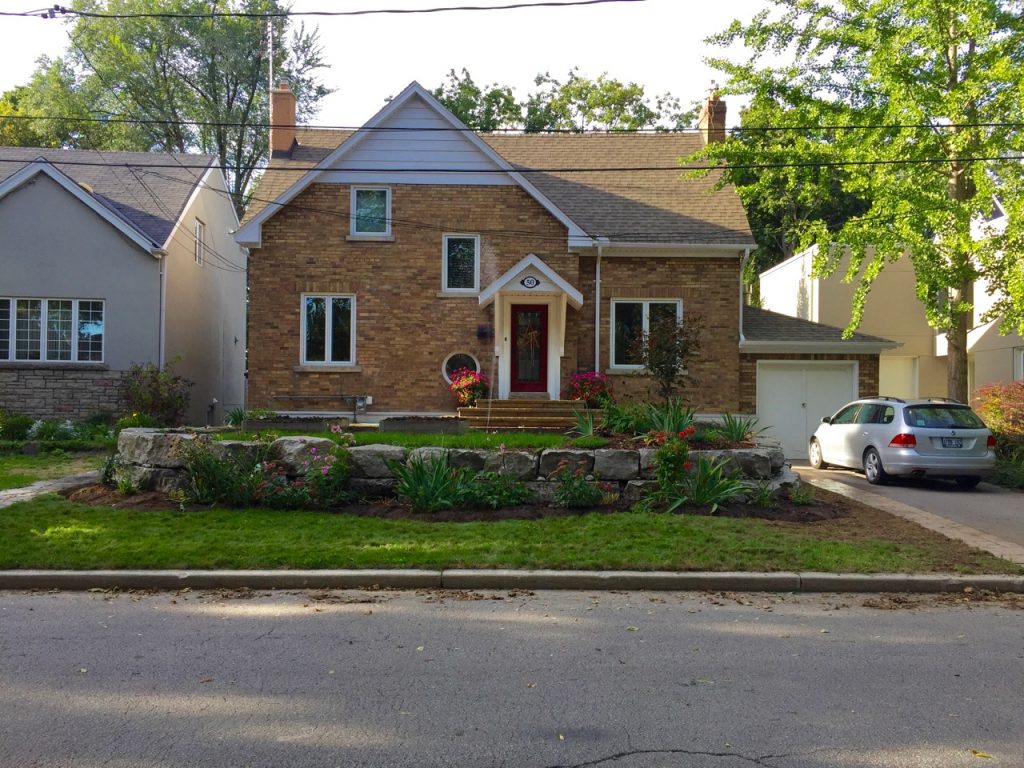 Here’s to next spring and more tulips!

Addendum: I stand clarified. According to this person’s sleuthing, Happy Generation and the Canada 150 tulip are indeed, separate cultivars (Canada 150 is the Carnaval de Rio, renamed). While they sure look similar according to the photos, this could also be attributed to the use of the same photos in the package design. Regardless, they will be very pretty. And probably, no one will be the wiser.