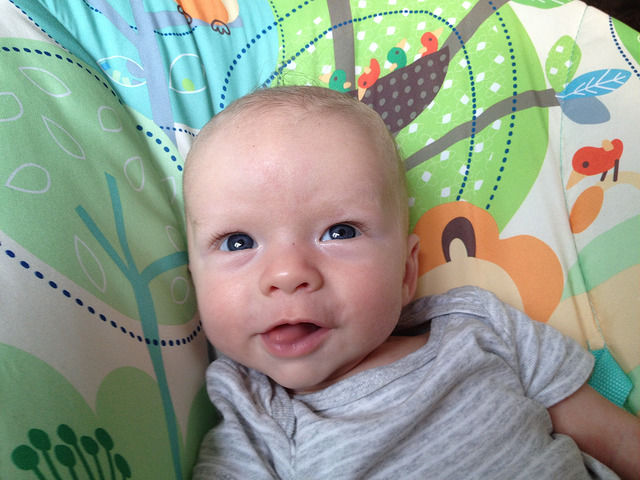 Last time I managed to catch up with my blog I posted about how we had finally gotten breastfeeding going. Well it hasn’t been without its ups and downs. I hear this is pretty normal but I think for us it has been especially difficult.

My first Mothers’ Day started out very sweet: a little bit of extra time to sleep in, home made eggs Benedict and a gift of hand crafted earrings featuring Conri’s birthstone. But as the day wore on, it devolved into what I can only assume was a milk duct blockage that  was incredibly painful, and resulted in Conri refusing to nurse that side (he may have been refusing to nurse that side which led to the blockage — it’s all a blur but I know he was extra fussy ahead of the blockage, and after). And the thing about a blockage is you need your baby to nurse to move it through. Once again I was in tears and questioning my commitment to this breastfeeding thing. It’s been almost nothing but challenges, and that one was awful. It was a full week of suffering — not so much the blockage, which after much research, massaging, hand expressing of milk and continued attempts to nurse worked itself out in a few days — but the remainder of the week I was beside myself with low milk supply issues and a baby who was unbelievably fussy on the breast. I fell apart emotionally. Coupled with concerns about weight gain expressed by my midwife and doctor, I was pretty sure I was ready to cry uncle.

In fact, every time we run into difficulties with this I question everything. And I mean EVERYTHING. Like why I even wanted to do this parenting thing in the first place. I go down some dark tunnels exploring regrets and feelings I never thought I’d have. Like, my life is changed forever and I don’t like it, no sir. Like my entire identity has been whittled down to become a feeding and baby sitting machine that doesn’t get to sleep, barely carves out non-crying time to eat, and has virtually no time at all to do any of the things that make up who I am…who I was.

Now I know, I know, it gets better. Or so other parents tell me. And my rational brain mostly believes them. But my dark, pessimistic brain is often freaking right the hell out. And I feel horrible thinking such things. Because at the same time, this wee person I’m in charge of is also simply amazing. He is miraculous and beautiful. And I want nothing more than the best for him.

Is this something all new parents go through? It’s scary as hell and leaves me feeling raw and wiped almost all the time. The lack of sleep doesn’t help.

And this doesn’t even speak to the breastfeeding challenges we’ve had and all the convincing I have to do for myself to keep at it. The decision to keep going or change to bottles and formula is wreaking havoc on me. Things are marginally better today, and I am continuously told by the clinic that it’ll get better soon. But I’ve come a long way in my thinking about bottle feeding and the potential freedom it offers has become EVER SO TEMPTING. But then I start feeling guilt about that. Gawd I never imagined that the method I chose for feeding my child to become such a personal dilemma.

I’ve rarely, very rarely, experienced my son getting that fulfilled milk coma from breastfeeding. That only seems to happen when we top him up with formula. I don’t have leaking breasts; I don’t have a sensation of let down. I don’t notice a dramatic change between full or empty breasts. I usually end feeding sessions after 45 mins to an hour rather than Conri indicating he’s done. He would probably be there all day if I don’t. Often he fusses so much in the later part of the feeding that I just get worn out and tired of it all. They tell me to switch breasts 8 to 10 times each feeding because, supposedly, there’s a new let down each feed, and this builds milk supply. I don’t know. I don’t see it happening, and 8 to 10 switches is exhausting — not just for me but seemingly also for him, because each switch gets him more awake and often more wound up. The reality is I vacillate between letting him nurse as long as he wants on each breast (or rather as long as I can stand it) and trying to switch often.

We keep hatching a plan to keep on trying for the next … week … weekend … until the next clinic visit. And like I said, things seem to marginally improve here and there (until the next challenge arises). But I’m tired. So very tired of it. I don’t really even enjoy it like I had hoped we would. There’s not a lot of satisfaction that comes from trying to feed my child when it often is so fraught with mystery — is he getting enough? Will he start gaining weight soon? When will I have truly had enough of it? Maybe there’s an improvement right around the corner and if I stop now I’m short changing my child? Sigh. I don’t even necessarily believe that and I’ve had so many chats with people who have had similar experiences, who say don’t beat yourself up over it and whatever decision you make is the right one. And I’m not at all interested in being a martyr. I’ve gone over the pros and cons of both, over and over. And over again.

Anyway, I’ve yet to figure out if it’s time.

This video got me thinking about all the unspoken things about becoming a parent that no one ever tells you. There are so many more than the four they outline here, I think. So far, in my very short experience.

That’s it for now… back to my personal purgatory of keep on keeping on… until I decide what to do next… if I even have to decide? Sigh.